The roots-based sound of Salvation Town carves out new stylistic terrain for Wickersham, who joined Social Distortion in 2000 after the untimely death of his friend Dennis Danell.

Wickersham, who co-wrote several songs with Ness for Social Distortion’s albums Sex, Love and Rock ’n’ Roll (2004) and Hard Times and Nursery Rhymes (2011), was also penning songs of his own during that time. He says, “I’ve always been a sideman, so I usually write songs with the hope that the singer will like what I’ve written, take it, tweak it and maybe add some verses of his own.”

Producer Kalish had been urging Wickersham to make his own record for years.  Finally, after tempting him with the opportunity to record with Pete Thomas, one of his favorite drummers, Wickersham could no longer resist and work on Salvation Town began. Over the next two years Kalish helped iron out some new tunes and put the finishing touches on pre-existing tunes like “Then You Stand Alone” and “Forlorn Walls” in between Wickersham’s stints recording and touring with Social Distortion.

The material reflects a multiplicity of musical styles and influences. Wickersham’s father, a professional musician who played folk, rock ’n’ roll, and country-rock, instilled in him a love of Southern California musicians like Jackson Browne, Warren Zevon and Linda Ronstadt.  Wickersham’s own taste in contemporary performers runs the gamut from Lucinda Williams and Ryan Adams to Calexico.

Wickersham adds, “As a second- or third-generation punk guy from Orange County, the kings of the music world for me were The Blasters, Los Lobos and X.  That school of musicians was as real as it could ever get. I connected with that really early on. That’s how I discovered music — basically, through those artists, the L.A. rockabilly scene, the L.A. roots-punk scene. They schooled me when I was still a little punk rocker on a skateboard.”

Wickersham says he was set on making an honest-sounding album without resorting to an overly manicured studio sound: “I was used to making raggedy-sounding music and I wanted to stay true to that without making a punk rock record.  It was important to me to record something that doesn’t sound over-produced and still has some spirit.”

The combination of Wickersham’s roots-music orientation and his dark, hyper-realistic compositions made for a stylistic shift that even the musician himself didn’t anticipate.  “The finished product is not necessarily what I set out to do,” he says. ”It’s not a guitar record, and that’s something that I wouldn’t have expected.”

For many, the greatest revelation of Salvation Town will be Wickersham’s accomplished, fully-realized songwriting, which grew out of his tumultuous youth in the L.A. and Orange County music scenes. Writing and recording this album of streetwise and sometimes painfully frank songs about a life lived with “one foot in the gutter and one foot kicking in the door to Heaven” proved to be somewhat of a cathartic experience.

He notes, “As I was making this record, I realized that in some of these songs I’m singing about things that happened a lifetime ago for me and that was challenging. I just accepted the fact that I needed to purge myself on this record.  I wrote about things that happened when I was growing up, feelings and experiences that I have had … stuff that I have never been that open about. Even though my life is different now all of those experiences are still hanging there, just below the surface.  I guess it never really goes away … those that have lived it know.” 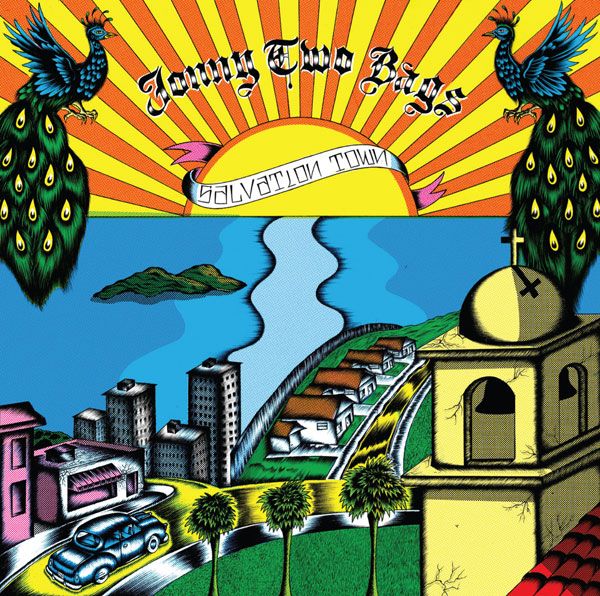